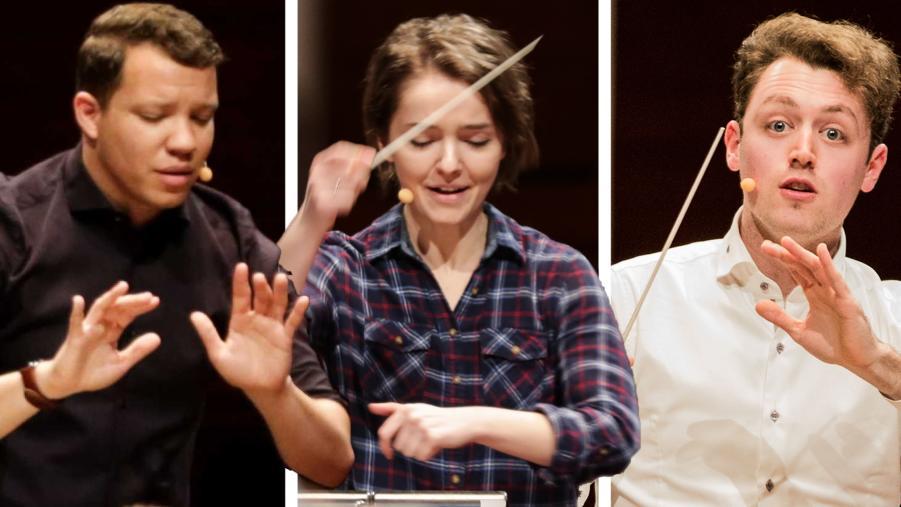 Tonight, the last remaining contestants in the Malko Competition will compete for the final time.

And then there were three. Tonight, the last remaining contestants in the Malko Competition will compete for the final time. One of them will walk away with €20,000, bookings at 24 orchestras from Stockholm to Suzhou, and a new mentor in Fabio Luisi. All three will have gained invaluable experience and given us so much to discuss and enjoy along the way.

Whatever you think of the jury’s decisions thus far, it’s hard to argue with the fact that three entirely different and highly complementary conductors have reached the Final. Here’s my personal take on what they’ve shown us so far, and what they need to deliver on – and be wary of – tonight.

Ryan is an emotional, embracing conductor in the Leonard Bernstein mould. He opens himself up to the Orchestra from the middle of his chest and demands its musicians show him their hearts in return. When it works, it works wonders.

Ryan’s shunning of the traditional conductor’s baton means he can glean extreme detail and delectable placement of notes with the tips of his thumb and forefinger, something we heard in his Mahler performance during Round 2. His technique is solid and natural, but his gestural language is neither as wide nor as focussed as that of his fellow finalist Alessandro Bonato.

In Brahms, Ryan will need to prove that his repertoire of gestures is enough to convey the constant shifts and nuances that the music requires clearly; this is where his canny explanatory metaphors and blazing emotions might not have such an effect.

But in No 2, Ryan has drawn the right Brahms symphony. The first movement opens with a huge musical hug that could be a metaphor for his whole approach. Ryan will need to master and communicate the music’s curious lurches from light to darkness and back, as well as its many wrong-footing rhythmic games and dangerous contrapuntal tendencies. In summary, Ryan needs to balance his head with his heart. There is no reason to believe he can’t do that, and more.

Alessandro has the sort of technique we would associate with a far older maestro. This 23-year-old can apparently control the DNSO with nothing more than the tip of his baton.

It’s not just a highly accomplished technique, it’s also a fascinating one. Alessandro’s two glaring eyes and the end of his stick form a piercing golden triangle that brings to mind the technical wizard Vladimir Jurowski. His ability to find, release and sustain the boiling point in a given score reminds me of the outstanding Finn John Storgårds.

Alessandro proved in the last round that he is able to address particular corners of the Orchestra directly, with instant results, while in full flow – sometimes two corners at once. That is thrilling to watch and could pay extreme dividends in the opening movement of Brahms’s First Symphony. But close your eyes, and you hear that Alessandro can mine a deep, distinctive sound in the DNSO too. Again, perfect for Brahms’s First.

Alessandro has an intellect that allows him to plot complex structures carefully and clearly, so the Brahms’s architectural tendencies should suit him. My worries surround his slight emotional detachment from the Orchestra on a human level, and also his youth and fragility; we saw him exhausted and lost for words at the end of the Mahler in Round 2.

On an atmospheric night like tonight, it could be that more overtly emotional performances from his competitors steal the hearts of the orchestra, the audience and the jury. One way or another, Alessandro needs to create the atmosphere he conjured up in that Mahler.

Anna – Servant of the Music

With Anna, we can talk not so much of technique as of someone from whom music flows like electricity through wires. The Russian has induced tenderness in the DNSO this week the likes of which few other contestants have come near. And in spite of some shaky moments early on, she has begun to wrest control of the Orchestra and show it that she is in command when it matters.

Again, Anna appears to have drawn the most appropriate Brahms symphony in the Fourth. The work’s first movement opens with a lilting dance not a million miles from the daisy-chain of wind motifs in Tchaikovsky’s Sixth that showed the best of Anna in Round 2. This mood pervades the movement and if Anna gets the flow from start to finish – weaves a single thread through it despite all the shifts in speed and lighting – it could prove her triumph.

She must, however, dig deep into the music’s churn and keep the orchestra together during those constant shifts in gait. Balance and colour are vital. But remembering how Anna found such beautiful colours in the chorale from Ruders’ Sarabande Blues during Round 3, this, again, could be where she delivers something brilliant. She just needs to keep her arms high and be constantly communicating with every instrumental group.

Of course, Anna also needs to control her nerves. She must insist that the conductor’s stand is at the correct height before she walks onto the stage, and then forget about everything but the music. We know that when that happens, Anna can be a total inspiration.